Where are all my Lego and Star Wars Fans? This one is for you.

On May 4, LEGO® Star Wars™: The Force Awakens MINILAND Model Display will take its final landing place in the center of LEGOLAND® Florida Resort’s  outdoor LEGO display area of the theme park. Created by a team of Master Model Builders, the giant display will feature memorable moments from Episode VII of the popular Star Wars™ saga enhanced with lights, sound effects and animation. The model addition includes the 16-foot-long Star Destroyer Finalizer, made of more than 350,000 LEGO bricks.
LEGO® Star Wars™: The Force Awakens MINILAND Model Display includes six exciting scenes set on the planet of Jakku, from Star Wars: The Force Awakens which include: Kylo Ren’s capture of Poe; Rey’s rescue of BB-8; Poe and Finn’s escape from the Star Destroyer Finalizer; The wreck of Finn and Poe’s TIE Fighter; Rey, Finn and BB-8’s escape from Niima Outpost; and the escape from the Starship Graveyard.
New Display Will Be the Centerpiece of the Popular Event
LEGO® Star Wars™ Days May 5-6, 12–13 & 19-20 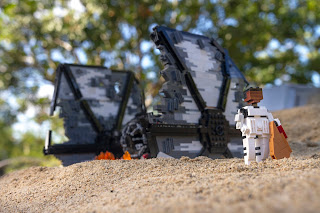 Just in time for the installation of LEGO® Star Wars™: The Force Awakens MINILAND Model Display, a brand new character has arrived at LEGOLAND Florida Resort. The fearsome First Order Stormtrooper of the blockbuster Star Wars™ film franchise, LEGO® Captain Phasma was spotted inspecting the model to ensure perfection ahead of its installation.  The giant new model is the highlight of LEGO® Star Wars™ Days.  This exclusive LEGOLAND event begins May 5 and runs for three consecutive weekends – more event days than ever before.  All activities are included with all forms of park admission. No extra ticket or Jedi mind tricks required for the only LEGO® Star Wars™ theme park event in Central Florida.
Event activities include: 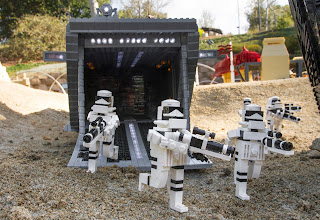 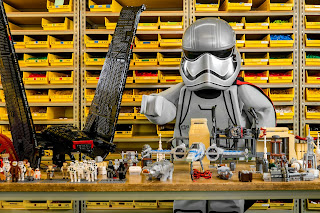