Day 2 and all about Chiari Malformation.

As we are closing in on another day I hope everyone is doing well and had a good day. Today was day 2. We did some grocery shopping today which took up most of the day. The girls also went to church youth group which allowed me some downtime with the boys. I find it enjoyable and with having a bigger family you have to find time to spend one on one with the kids as well as spend time with all of them. It is kind of nice since the girls are close in age and can pair off and the boys are closer in age and can pair off. Sadly I didn't get to continue with cleaning out the shed because i spent 2 hours on the phone with Spectrum trying to fix issues as we are transferring from hubbies name to mine and they ended up turning services off and it was a big mess. Luckily after 2 hours we have everything back to the way it was. After that was dinner and then getting the boys ready for bed and by that time it was raining and getting dark so no shed time. Before school starts August 21 I need to get the shed cleaned out, we need to get the new floors in, get the siding up on it on the inside walls, get the desks in and get everything set up. I think this is going to take much of the time the next 6 weeks on top of the appointments.

Today I am going to try to educate everyone on Chiari Malformation. My youngest kiddo has chiari type 1. There are several types of Chiari Malformations. Overall a chairi malformation is a neurological condition in which the tonsils of the cerebellum descend out of the skull and into the spinal area. This results in compression of parts of the brain and spinal cord, and disrupts the normal flow of cerebrospinal fluid. 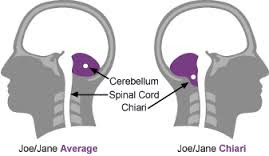 Common symptoms: headaches especially at the back of the head, symptoms related to the mouth and throat, such as reflux, gagging, problems feeding, raspy voice, and chronic cough, pain in neck and shoulders, weakness stiffness or pain in arms and legs, loss of bladder control, balance problems, numbness in hands and feet, and loss of fine motor control. These are just some of the symptoms. The list goes on and on and can depend on age. Children may have different symptoms than adults and many people have no symptoms or dont start having symptoms until they are in theirs 20's-30s. Research has shown that 95% of patients experience at least 5 symptoms. 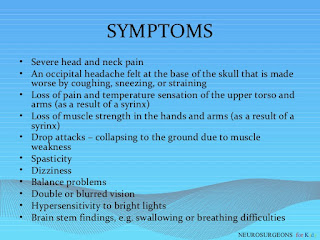 General Facts: 1. Chiari Malformations affect approximately 1 in 1,000 people but may be higher due to those with no symptoms or misdiagnosis. Many doctors blame symptoms on a mental or emotional problem and people dont get a correct diagnosis until way down the road. 2. Chiari affects people of all races and ages. 3. Many patients undergo traumatic surgery in an attempt to stop symptoms from progressing and upwards of 50% of patients continue to suffer from symptoms, such as chronic pain and nerve damage, even after surgery; many patients end up on disability, socially withdrawn, and depressed. 4. The physical, mental, emotional, and economic strain caused by Chiari often pushes families to the breaking point. 5. Chiari is diagnosed using combination of MRI, neurological exam, physician’s judgment, and other tests; patients often go 5 or more years before being properly diagnosed. 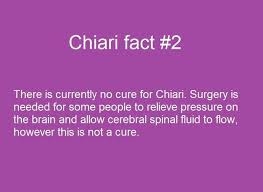 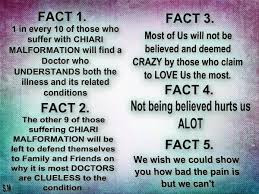 How are chiaris classified? Chiari malformations are classified by the severity of the disorder and the parts of the brain that protrude into the spinal canal. Type 1: This is when the cerebellar tonsils extend into the foramen magnum. This type is the most common and may or may not cause symptoms. It is usually found in late adolescence or adulthood and is often found by accident while looking at other things. Those with no symptoms may develop them later in life. 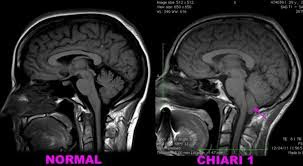 Type 2: People with type 2 often have more severe symptoms and are usually found in childhood. In this type both the cerebellum and brain stem tissue protrude into the foramen magnum. Also the nerve tissue that connects the two halves of the cerebellum may be missing or only partially formed. A type of spina bifida is also usually found in this type. The term Arnold-Chiari malformation is specific to Type II malformations. 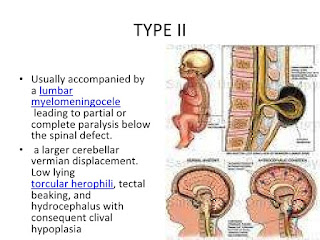 type 3: This type is rare and is also the most serious. In this type some of the cerebellum and the brain stem stick out through an abnormal opening in the back of the skull. This can also include the membranes surrounding the brain or spinal cord. Symptoms appear in infancy and can cause debilitating and life-threatening complications. 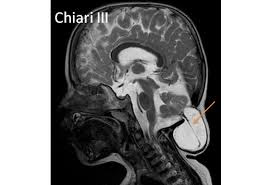 Type 4: this type is also rare and involves an incomplete or underdeveloped cerebellum. Unlike the other types, the cerebellum is located in its normal position but parts of it are missing, and portions of the skull and spinal cord may be visible.

Im hoping I was able to educate at least some of you and I hope you guys enjoy the rest of your day/night. Stay tuned tomorrow for day 3. 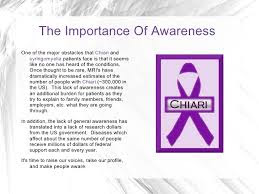 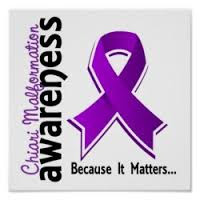 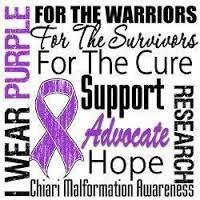 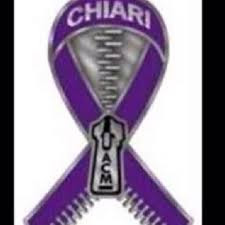