September is Chiari Awareness month. Our first time raising awareness was back in 2012 when my sister in law was diagnosed. We as a big family group attended our local walk that year. it was great to be able to get so much support and raise awareness together. We even all had matching shirts. 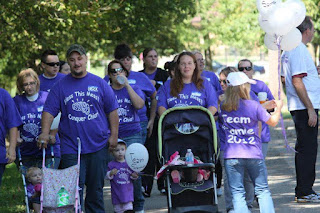 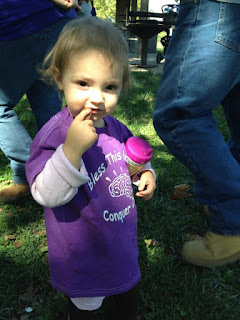 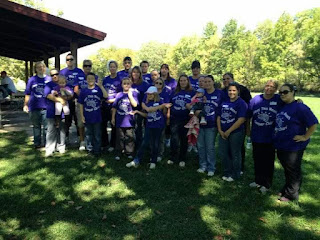 Fast forward to 2016 and Silas was diagnosed with Chiari as well. This was a very scary time. Last year just the 6 of us attended our local walk. There were a lot of people there and it was nice to be able to meet other local people going through the same thing. Most people there were adults with Chiari, but luckily we were able to meet a few families that had kids with Chiari as well. Sadly this year we are going to have to miss the walk, but will still be raising awareness. 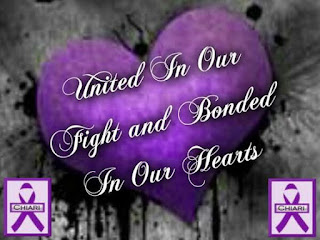 So, what is Chiari? According to Conquerchiari.org, Chiari Malformation Type I (CM) is a neurological disorder where part of the brain, the cerebellum (or more specifically the cerebellar tonsils), descends out of the skull into the spinal area. This results in compression of parts of the brain and spinal cord, and disrupts the normal flow of cerebrospinal fluid (a clear fluid which bathes the brain and spinal cord). There are actually different types of Chiari. Type 2 is more severe with more of the brain coming out of the skull, and is often associated with spina bifida. 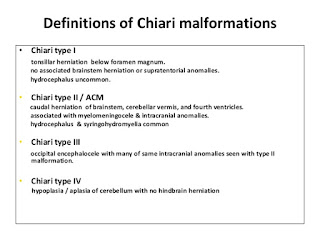 There are many symptoms that come along with Chiari. The biggest and main symptom is headaches usually brought on or made worse by coughing or sneezing. Other symptoms include neck pain, respiratory problems, sleep apnea, loss of fine motor control, balance problems, muscle pain and weakness and numbness. This is just the beginning of a long list. 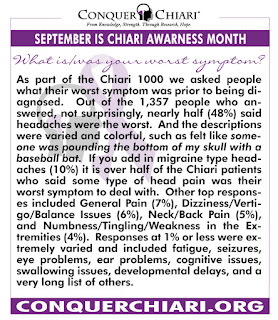 There are also a lot of conditions that are considered co-morbid with Chiari. Ehlers danlos syndrom, scoliosis, Syringomyelia, spina bifida, are just among some of the conditions that can come along with or be a part of chiari. 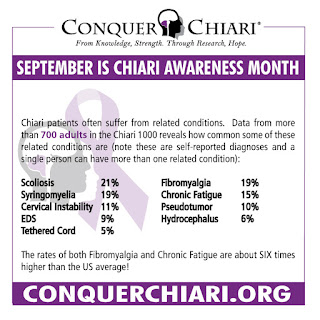 There is NO CURE for Chiari. One of the treatments is to have decompression surgery, but this is not a fix. 50% or less of people diagnosed with Chiari have surgery, most end up just treating symptoms as they come or do a wait and see approach. In a decompression surgery they take out a piece of the skull and sometimes part of one or more vertebrae are removed. If needed the covering of the brain is opened and a patch is sewn in to make it bigger. The surgery itself usually lasts around 4 hours. After surgery the patient usually spends at least a day in the ICU and then another few days in a regular room. Actual recovery can take months to happen it all depends on the person. For most, most if not all of their symptoms go away.  Symptoms that may stick around include pain, muscle weakness, and loss of sensation; patients will adapt their lifestyle accordingly. Symptoms may fluctuate over time. Over the long term, symptoms are more likely to return or relapse. 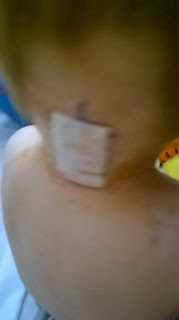 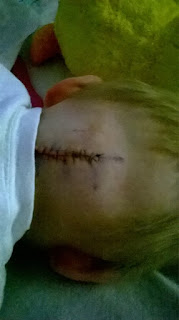 Help us raise awareness as Chiari is still relatively new and there still isn't a lot known about it.