Something new is coming to the Indianapolis Zoo. This exhibit is the only one of its kind in North America. 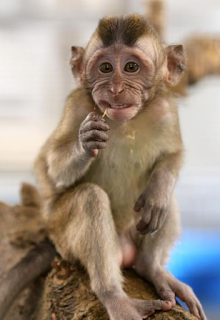 A new troop of captivating monkeys has arrived at the Indianapolis Zoo, the only zoo in North America where visitors can meet this species of macaque. Their new habitat in the Oceans area of the Zoo is perfectly suited for them because they are the only species of macaque who swim throughout their entire lives.

As guests walk past the penguins in Oceans, they will start to learn about these unique monkeys and come upon a large underwater viewing window. Outdoors they will find multiple viewing windows to observe the macaques jumping, climbing and having fun.

All the monkeys in the troop are part of a strict social hierarchy, with more dominant individuals guiding behavior. This order helps balance competition with cooperation, allowing members of the troop to share resources and avoid conflicts. One way long-tailed macaques show friendship is to engage in grooming. Grooming each other maintains friendships and creates alliances that are communicated to other members of the troop.

Long-tailed macaques, which are the Zoo’s fifth primate species, are commonly found near water throughout the islands of Southeast Asia. Macaques are a unique group of 20 different monkey species who live in diverse habitats including tropical forests, snowy mountains and urban areas. These confident swimmers will take to the water to cool off, escape predators, catch food or even just to play.

Macaque hands are very similar to human hands. Like us, they use them for grasping, catching, climbing and even using tools. They make their own hammers out of rocks and use it to pound the shell of a crab or snail to access the food inside. Long-tailed macaques sometimes pluck hair from people’s heads to use to floss their teeth!

Highly adaptable, intelligent and curious, these monkeys have figured out how to survive in areas, both urban and rural where human populations are growing. Tourists travel far to see these monkeys — some people consider them sacred, others view them as pests.

As the human population expands, humans and wildlife share the same space. Hoosiers can learn to share urban spaces with wildlife, just like people in Southeast Asia have learned to share space with long-tailed macaque.

About the Indianapolis Zoo

The Indianapolis Zoo empowers people and communities, both locally and globally, to advance animal conservation. Located in White River State Park downtown, the Indianapolis Zoo is accredited by the Association of Zoos and Aquariums and the American Alliance of Museums as a zoo, aquarium and botanical garden. Visit IndianapolisZoo.com