Seven rescued manatees are getting a second chance at life after months of rehabilitation, thanks to the dedicated efforts of multiple facilities including SeaWorld Orlando, the Columbus Zoo and Aquarium,  theJacksonville Zoo and Gardens, South Florida Museum,  U.S Fish and Wildlife and The Florida Fish and Wildlife Conservation Commission (FWC).   All are a part of the Manatee Rescue and Rehabilitation Partnership (MRP), a cooperative group of non-profit, private, state, and federal entities who work together to monitor the health and survival of rehabilitated and returned manatees. 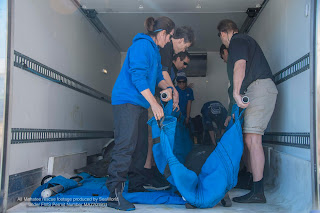 All seven of the manatees were tagged prior to release, allowing Clearwater Marine Aquarium Research Institute to monitor their movements, contributing to ongoing research and conservation of the species.

The goal with every rescue is to rehabilitate and return the animal to the wild as quickly as possible.  Young manatees, or those afflicted with challenges such as red tide or cold stress often take additional time and resources.  MRP facilities are able to work together to shift rehabilitating animals between facilities to ensure future rescues are not turned away, and to maximize facility expertise.    SeaWorld Orlando is one of only five acute care rehabilitation facilities in the U.S. that can provide life-saving medical care to rescued manatees.

Rehabilitated Manatees Returned:
Bambam was rescued on January 18, 2015 as a young calf suffering from severe cold stress.  He was flown to the Cincinnati Zoo & Botanical Garden as part of the MRP where he spent two years gaining weight and preparing for his return.  He was returned to the wild last year, but after an infield health assessment, the teams determined he was suffering from cold stress and dehydration and needed additional care.  The teams are hopeful that this release in a larger group of animals will help his acclimation back to his natural environment, but he will be carefully monitored for the next year.

Goober, a young male, was found alone and malnourished in 2017.  Goober was rescued by the Florida Fish and Wildlife
Conservation Commission (FWC) from Desoto Canal in Indian Harbour Beach. He was so thin when he was found that the rescue team thought his shape resembled a peanut. They affectionately named him Goober, after a Southern nickname for “peanut.” After being stabilized at SeaWorld Orlando, he spent over a year rehabbing at the Columbus Zoo before this week’s return.

Agua was rescued as a calf with her injured mother “Claro” in Clearwater, Florida on June 24, 2016. She was only 130 centimeters long and 97 pounds at the time of her rescue. Both Agua and her mother were transported to ZooTampa but her mother “Claro” did not survive her watercraft injuries. Agua was transferred to the Columbus Zoo for continued care as an orphan calf.  In preparation for release, Agua was transferred to SeaWorld Orlando. .

Camlee, was rescued as an orphan calf from Cape Coral, Florida on May 11, 2015.  She was only 90 pounds at the time of her rescue.  Camlee was cared for at ZooTampa and later transferred to Homosassa Springs Wildlife State Park. She was first released in early 2018 but was rescued again in March 2018 after developing cold stress and dropping a significant amount of weight.  She was brought to SeaWorld Orlando for rehabilitation treatment where she spent the past year growing healthy and strong enough to be reintroduced into the Florida waters.

Percy was rescued by FWC and Jacksonville Zoo and Gardens in late 2017 suffering from symptoms of cold stress, particularly
around her face and pectoral flippers, andspent the first month at SeaWorld Orlando’s acute care facility.   She was transferred to the Jacksonville Zoo in early 2018, where she spent the past 15 months rehabilitating.

MJ was an orphaned calf, weighing just 60 lbs. at the time of her rescue in May 2016 off Satellite Beach, Florida.  She spent almost two years rehabilitating at SeaWorld Orlando and was transferred to the Jacksonville Zoo last March to complete her rehabilitation.

Baca is a male manatee who was rehabilitated thanks to the cooperative efforts of SeaWorld Orlando and South Florida Museum, where he spent the past several years gaining weight and strength before being returned to the wild late last week.

The Florida manatee is at risk from both natural and man-made causes of injury and mortality. Exposure to red tide, cold stress, and disease are natural problems that can affect manatees. Human-caused threats include boat strikes, crushing by flood gates or locks, and entanglement in or ingestion of fishing gear.
“SeaWorld Rescue is on call 365 days a year, 24 hours a day,” said Jon Peterson, manager of rescue operations at SeaWorld Orlando. “Any time there is an animal in need, we are there to help them. That is the goal here at SeaWorld: to rescue, rehabilitate and return as soon as possible.”
Guests at SeaWorld Orlando can learn more about the vital work SeaWorld does for wildlife at the park’s behind the scenes Rescue Center, used for rehabilitating wildlife that has been ill, injured or orphaned – including manatees, sea turtles, birds and other marine animals.

All manatee rescue footage is produced by SeaWorld under the FWS Permit Number MA770191.